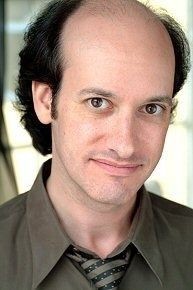 Lorin Eric Salm is an American actor and mime instructor. Trained by the world-renowned master of mime Marcel Marceau, he is a graduate of Marceau's Paris International School of Mimodrama. Mr. Salm teaches mime at his own Mime Theatre Studio in Los Angeles, is a movement coach and mime coach for Hollywood film and television productions, a guest instructor for Cirque du Soleil, and teaches character movement to top animation studios. Lorin kindly agreed to answer some questions about mime.

Gloria: How and when did you first become interested in mime?

Lorin: I grew up with an interest in acting, and in an age when everybody knew Marcel Marceau's work. Strangely, I don't really remember what I saw of Marceau when I was young, but it's likely I saw him in some of his frequent American television appearances. One of the first mime influences I do remember was Shields & Yarnell, an American mime duo that had a popular network television show from 1977-78. My friend and I used to watch the show and then imitate their movements and characters. When I was thirteen years old, I studied acting for the first time at a summer theatre camp for children at the Will Geer Theatricum Botanicum, a Shakespearean theatre in Topanga, California. One of the classes offered was mime, and since I already had an inclination towards it, I decided to take the class. I found I had a talent for it, and so as I continued to study theatre in school and during my summers, I studied mime whenever it was offered. Two years later, I won an award for a group mime performance in a Southern California school theatre competition, so my affinity for mime as part of my acting work continued to grow.

The turning point for me came when I was in college. By the end of high school, I was acting, singing, dancing, and playing music. I had become good at some of these arts, and very good at others. I wanted there to be one art, though, that I would truly master. While I was doing my theatre studies at California State University, Northridge, I found out -- by sheer coincidence -- that Marcel Marceau had been teaching three-week seminars in Ann Arbor, Michigan, every summer for the past several years. Although intimidated by the idea of going to study with Marceau, I registered for what would turn out to be the last of the seminars he gave there until many years later. The first thing I learned about mime at the seminar was that with all the experience I had up to that point, I knew virtually nothing about mime. During those few weeks, though, I was introduced to an art form that was richer and more profound than I ever could have imagined. I got to see Mr. Marceau perform live for the first time in my life, as he was doing shows for the Ann Arbor Summer Festival. I discovered that mime was an art that combined my love for acting and for movement, and to which I could apply my sensibilities for music and dance. I had found the art I wanted to master.

It was at the seminar that I first learned that Marceau had a full-time school in Paris. After a return to Michigan two years later to study with Polish mime master Stefan Niedzialkowski, I finished my degree in Theatre Arts, and then headed to Paris to spend three years studying with Marcel Marceau and the many other wonderful teachers at his school.

Gloria: What was Marcel like as a mime teacher? To perform with on stage?

Lorin: I found Mr. Marceau to be a wonderful teacher. Of all the teachers one may have in one's life, it is an unusual thing to study with one who is world-famous for his work, and considered the master of his art. It would be easy to say that such a person has earned the right to be egotistical, uncompromising, overly-demanding, and as critical as he wishes. Mr. Marceau was none of those things. He was fully aware of who he was and the stature he had attained, yet always mindful of the roots of his art and of those great artists who came before him and from whom he learned and was inspired. He was demanding of his students because of his love for the art of mime and his concern that it must be performed with the utmost attention to quality in order for it to be highly regarded by the public. He was very patient in his dealings with students, taking all the time necessary to help students understand and learn. He was kind and diplomatic even with the most challenged students. One of the things that made him a particularly great teacher was his ability to incorporate all his worldly knowledge into his lessons. He would make references to all the other arts -- dance, painting, sculpture, music, etc. -- and to religion, politics, sociology, psychology, and anything else that was useful in helping us understand that mime calls on all of these aspects of human experience as its material.

My experience performing with Mr. Marceau was limited to only one occasion, but this was enough to see that he took his work very seriously. He was meticulous in his preparation of everything from lighting and music to entrances and exits, and even to details such as that the title cards used to introduce his pieces were held perfectly straight by his assistants. Mr. Marceau used to equate a mime actor poorly executing a gesture with a musician playing a wrong note. It was clear that this philosophy extended to every element of his performance. Participating with him in a performance approached with such high regard for excellence infused me with both a great enthusiasm for what I was doing and a great responsibility for doing it well. I truly felt the weight and the honor of performing alongside the master.

Gloria: Mime is probably not the most popular of the performing arts in the public's mind. Why do you think that is? Do you agree?

Lorin: I believe the art of mime is greatly misunderstood, and that this misunderstanding leads to its under-appreciation. There was a long period during the height of Marcel Marceau's popularity when a great many performers imitated him without the proper training and education in the art to do justice to its possibilities. They copied the outer technique, but didn't know how to fill the technique with the inner life that is essential to touching an audience in a profound way. Many also performed in the streets, where mime became seen as more of a quaint amusement than a serious art of the stage. Even those who saw Marceau perform were most likely familiar with his one-man show, and most people today continue to think of mime as a solo performance. There is a whole other side to mime which is ensemble mime theatre, in which groups of actors perform mime plays, from short pieces to full-length productions, utilizing costume, scenery, music, and often props. In spite of the fact that Marceau led mime companies that toured the world with their performances, the majority of the public today seems unfamiliar with ensemble mime theatre, so the stereotype of the solo performer continues. Film and television also help perpetuate a poor view of mime not only by limiting virtually all representations of mime to the stereotype, but often by mocking or mistreating the character of the mime performer.

Although some perceive mime as a dying art form, the reality is that it is still performed in many countries around the world, in styles resembling Marceau's, and in styles completely different from his. Some of these other styles originated before Marceau's and developed independently alongside his, and some are a fusion of contemporary mime styles and older regional forms of theatrical performance. Mime festivals and theatre festivals featuring mime take place annually in several countries, continuing to inspire the development of mime through new creations, and providing the opportunity to expose a new generation of the theatre-going public to this centuries-old art.

Gloria: Have you noticed a difference in the way children and adults respond to mime?

Lorin: Mime is wonderful in the way it calls on the audience's participation through imagination. Children are easily able to see something for what it is, and are more than willing to lend their imagination to the experience. Adults tend to be more analytical about what they see, I think, and run what is presented to them through various filters in their minds, arriving at some interpretation. I think mime can reach them as easily as it does children, but they may not be as aware that it has. Mr. Marceau used to tell the story of a woman who came to see him backstage after a performance and asked him questions about his piece "The Creation of the World". She said she felt that she didn't understand quite everything in the piece, and wanted to know what she missed. Instead of explaining, he asked her, "What did you see?" She proceeded to describe everything in the piece -- the water, the fishes, the Garden of Eden -- and soon had described the entire piece. He pointed out to her that in fact she had understood everything.

There are some aspects I find adults are more aware of in a mime performance, as they often recognize and comment on the physical skills of the mime performers. They seem able to enjoy the dramatic experience while appreciating the virtuosity involved in the performance itself. Children are not aware of such things, and can totally immerse themselves in the dramatic moment. I find that both children and adults respond positively to a well-executed mime performance, but that they experience and appreciate it in different ways.

Gloria: You've taught movement to animators at Disney and Dreamworks. Can you tell us more about that?

Lorin: Animators were once famously described as "actors with a pencil". Nowadays the pencil is often replaced by a computer, but usually the animator is still solely responsible for the physical part of a character's performance. (The exception being the ever-growing use of performance capture to incorporate a live actor's movements into an animated character's performance.) In their training, animators learn much about character and movement, but the approach seems to be different than the way an actor learns these things. Even when acting teachers are brought in to teach animators, making the connections between the work of the animator and techniques meant for live actors is sometimes difficult. Since mime's focus in acting is specifically the physical aspect of expressing the personality, thought, and emotion of a character, it lends itself very well to the animator's art. I selected certain concepts and techniques from the art of mime that I felt would be applicable to animation, and happily discovered that most of these aren't generally part of the initial education even of animators working at these top studios.

The animators in the workshops I give tend to be much more shy than acting students, but in the end they seem to become more comfortable with, and enthusiastic about, using their own bodies to try out and discover the attitudes and movements they will eventually lend to the characters they create.

Gloria: Thank you very much Lorin. That was a fascinating insight into many aspects of the world of mime that most people are not aware of.

You can read more about Lorin's work on his sites:

Interview: Inbal Gigi Bousidan
We had been looking at portfolios of illustrators work and as soon as I saw Inbal's I thought 'That's it'. It was love at first sight. Later, when I saw her first illustrations, I knew we had found the right illustrator for the job. I was curious about how Inbal went about illust...
Read More