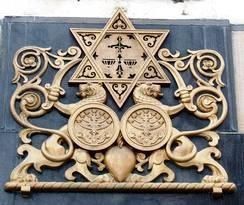 In 1847 London got its first double decker omnibus and Londoners got to see London above eye level. Well not quite. You get what you pay for, and those first double-deck passengers may have had a seat with a view but they were most likely too busy shivering in London drizzle to be able to enjoy the view. Those early omnibuses were roofless and tickets to the top deck went for a third of the price of those below.

It wasn't until the 1920s that the top deck finally got a roof and Londoners could get an above eye level's view of the city without getting rained on - even if they did have to shell out a few more pennies for a ticket. Whoever had the bright idea to shelter London's' bus passengers from the inclement weather introduced me to the work of the Polish artist Arthur Szyk. For it was on a rainy day, from the top deck of a number 25 London bus that I first noticed the metal relief with the Star of David, above the doorway of Albert's Menswear at 88 Whitechapel High Road. I had walked past no. 88 countless times, yet until that trip on the top I'd never noticed this work of art. But what was it doing a menswear

Number 88 Whitechapel High Road has been home to Albert's menswear since the 1940s. The premises were previously occupied by the offices of the Jewish Press, which had commissioned the relief from the Polish artist Arthur Szyk. Arthur Szyk (pronounced '') first arrived in England in 1933. He was 39 and already a renowned artist famous for his medieval style illuminations. He had recently completed a tour of Poland, the length and breadth of the country with an exhibition of his work, sponsored by the Polish government.

The main attraction of this exhibition was illumination of the Statute of Kalisz. In 1264 Grand Duke Boleslaus the Pious granted the Jews of Poland a whole host of rights and freedoms the like of which Europe had never seen. These were codified into a 46 chapter document called The Statute of Kalisz. When the Statue came into effect it became illegal to accuse a Jew, amongst other things, of using Christian blood for Jewish ritual purposes. Boleslaus was at pains to point out that it was quite absurd to suggest that Jews would nosh on blood matza since consuming blood was strictly forbidden according to Jewish Law. But old habits die hard and Boleslaus probably realized that the locals probably weren't convinced, so he inserted the proviso that any Christian who still insisted on accusing a Jew of using Christian blood for Jewish Ritual now had to provide 3 upstanding Jewish witnesses and four Christian witnesses. But this wasn't all. Jewish courts now had sole jurisdiction over Jewish matters. The authorities were also required to protect any Jew summoned to a Christian court. Other examples of protections included fines for anyone who jeered at synagogues, permission to walk or ride freely any place in the realm and, curiously, the right to touch bread. And these are just a handful of rights that Boleslaus granted the Jews of Kalisz. Back in those days, it was cutting edge religious tolerance and freedom.

Syzk called the Statute 'The Golden Book of Polish Judaism' and in 1926 when Marshal Jozef Pilsudski took over Polish rule after his coup d'état, Syzk turned his prodigious artistic talents to illuminating the Statute of Kalisz. Szyk admired Pilsudski's fair treatment of Poland's minorities and dedicated his illuminated manuscript to Pilsudski, who was considered to be a pal of the Jews. The Statute may have been a medieval document, but Szyk believed it had an important message for the world - one of freedom and tolerance. Szyk illuminated his Statue in the medieval style but the themes were modern. He showed Polish Jews throughout the ages participating in Polish life. Whether it was the minting of the first Polish coins by Jewish craftsmen or Jewish soldiers participating in the struggle to liberate Poland in the First World War, Szyk's message was that Polish Jews had not only brought economic benefits but had also fought for their country's freedom.

The Statue was exhibited in Paris and Geneva to critical acclaim. In 1932, the Polish government sent Szyk on a yearlong a tour of Poland with the Statue of Kalisz as the star attraction. The tour was a box office smash hit, selling thousands of tickets, and postcards. But over in Germany anti-Semitism was flourishing. Hitler had been elected to the Reichstag in January 1933 and Nazi plans for segregating Jew and Aryan were full swing ahead. Anti-Jewish laws were mushrooming. Jewish civil servants were ousted from government jobs, doctors and lawyers had their work and income seriously cut, Jewish businesses were boycotted and quotas for Jewish students were established in schools. So much for tolerance.

The Polish government was keen to show that unlike the Germans they were tolerant and enlightened. And Szyk's work was the ideal vehicle. decided to use Szyk's work to promote the message of brotherhood and and sent Szyk and his exhibition to England. A fellow Polish Jew, Sidney Salomon, offered to host the exhibition free of charge at his West End art gallery and the Polish government footed the bill for the opening reception and printing the . The Polish ambassador opened the exhibition. After the West End, Szyk's exhibition moved to the Bishopsgate Institute in Liverpool Street, about half a mile from Albert's Menswear.

In Britain too, Szyk's exhibition and the of Kalisz was a success. The general press extolled the artistic merits of the Statute and the Jewish press drew attention to its opportune message of freedom in the light of the worsening situation of the Jews in Germany. The Szyks and the exhibition returned to Poland and plans for a US tour were soon underway. It would be another two years until they returned to England. Szyk continued to work on his own projects, including illustrations for his famous Haggadah.

The Szyks returned to London in 1935. It was during this visit that he was commissioned to produce the gold painted cast iron metal relief that still sits above the doorway of 88 Whitechapel Road, as well as two smaller panels with the same design inside the building. The relief shows two lions of Judah grasping swords with a Star of David in the . Scales of justice stand in the middle.

In 1935, number 88 housed the offices of a new Jewish newspaper, the Jewish Daily Post, England's only English language Jewish daily paper. The newspaper was set up to rival the more established Yiddish language Di Tsayt (The Jewish Times) located further east at 325 Whitechapel Road. The Post was to provide daily news to the younger generation of Jews who preferred their news in English. And it was the Jewish Daily Post that published two of Szyk's earliest cartoons in February and March 1935. Concerned for the fate of Jews in Nazi Germany, Szyk would go on to produce hundreds of anti-Nazi cartoons and caricatures alerting the world to the evils of Hitler and the Nazis. In September of that year, the Nazis would institute the infamous Nuremberg Laws restricting German Jews even further and excluding them from German citizenship.

By 1936 the Post had closed and Szyk was hard at work on his famous illuminated Haggadah that would become his best-known project. Today the metal relief remains above Albert's Menswear in this busy part of London, a work of an activist artist.

When you subscribe to the blog, we will send you an e-mail when there are new updates on the site so you wouldn't miss them.

Interview: Inbal Gigi Bousidan
We had been looking at portfolios of illustrators work and as soon as I saw Inbal's I thought 'That's it'. It was love at first sight. Later, when I saw her first illustrations, I knew we had found the right illustrator for the job. I was curious about how Inbal went about illustrating the book. Thi...
Read More